Wakeboarding is a 30-year-old water sport with roots in both water skiing, surfing and snowboarding. During wakeboarding, the driver is fastened to a board and towed by a motorboat with speeds of around 30 miles per hour. The rider will ride the surface of the water and perform wakeboarding tricks behind the boat. Wakeboarding now has a number of different styles and offshoots, including kneeboarding and wakeboarding.

It was first invented in Australia in the 1980s, wakeboarding was originally called skurfing and used non-binding hand-shaped boards specifically designed for towing. Skurfing has now died in the advent of wakeboarding, which uses bindings.

Wakeboarding now has a range of different forms and techniques, including kneeboarding and wake-up.

Over the years, wakeboarding has been claimed to have originated in a variety of different locations. The most commonly accepted origin is that of Australia during the 1980s when a skurf board was handed to a guy called Jeff Darby. Jeff and his mates set out to create their own skurfing boards, specifically designed to be towed behind vessels. They ended up setting up their own branded company called Skurfer, which sold these boards.

At about the same time in Florida, a surfer called Howard Jacobs was surfing on his smaller boards behind boats. He was adding foot straps and pads to the board to try tricks that were merely impossible on a normal surfboard.

There were two notable companies selling wakeboards by the mid-eighties. Darby which joined forces with surfboard shaper and inventor Bruce McKee. They created the ‘Mcski’ board which was later renamed the ‘Wake-snake.’ McKee and his associate Mitchell Ross created the ‘Surf-Ski’ board and launched it at the IMTEC show in Chicago in 1984. 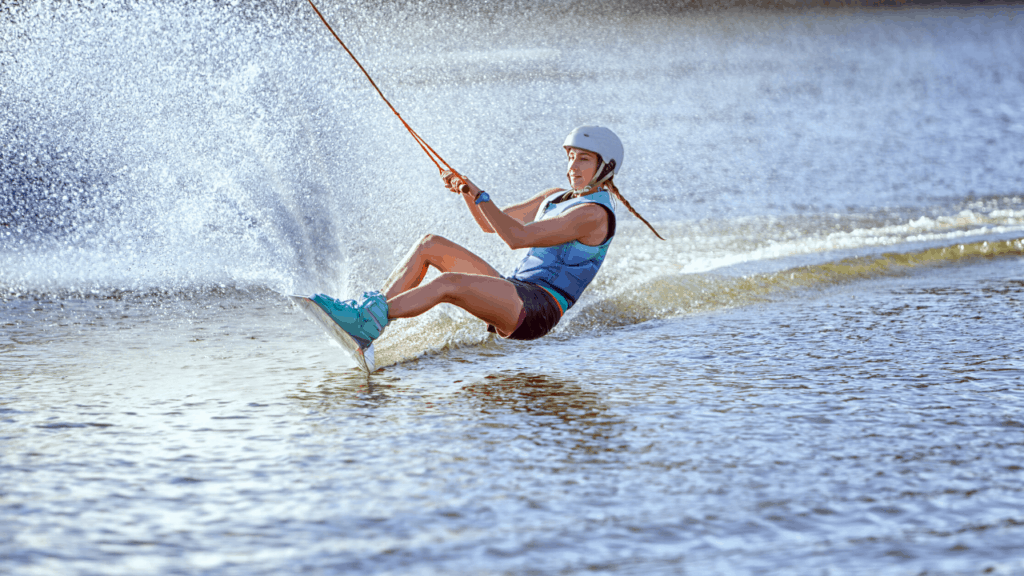 While learning any new sport will be challenging, to begin with, it is well known that wakeboarding is a water sport that can be picked up faster than most others. You can kick start your wakeboarding workout by reading a few tips to make the first few times more successful.

The first, most important thing to learn is which foot you should be leading. A good way to do this is to do a run in a straight line, and come to a sudden stop. The foot you put out in front to stop yourself is likely to be your lead foot!

If you first attempt to stand up on a wakeboard, put about 60 percent of your weight on to your front foot. Stay close to the board and Straighten your legs. Standing up straight away is a sure-fire way to fall right off!

The best position to take on your first few goes on wakeboarding is to place the back fastening far back to the end of the board and align it at zero degrees so that your weight is pressed directly to the top of the back fin. The front link should be pointed towards the front end of the wakeboard.

If you want to give wakeboarding a go, most centres will be able to rent out all the necessary wakeboarding equipment. But if you’re going to invest, here’s what you need to get started.

A boat – The kind of boat you ‘re using has a significant impact on how you wakeboard. Bayliner Boats, Axis Boats and Calabria Boats, are among the best types of vessels for wakeboarding.

A Board – Beginners should look to buy a double-ended board with a fin, as they are more stable. Look for quality fin boards and a continuous rocker. Take a look at some of beginner wakeboarding boards.

Rope – Beginners will use a thin rope that is non-stretch. The shorter the rope, the better and you will have more control while learning.

Wetsuit – The thickness of your wetsuit depends on the conditions of your wakeboarding. Most beginners will spend a lot of time in the water, and if you’re learning in the UK, a 5/4 mm wetsuit will be suitable for most of the time of year.

Buoyancy Aid – Does it look badass? No. Are you supposed to wear it? Yeah. Use your brain, children.

A board, bindings and safety equipment are also required to start your wakeboarding journey.

Some Of The Best Placed To Go Wakeboarding in The UK

You can enjoy wakeboarding on both lakes and coasts around the UK. For beginner wakeboarders, the calm conditions of the lake are better suited to finding your legs and standing up.

There are many lakes where you can go wakeboarding, as well as several other wakeboarding parks across the UK, plus incredible wakeboarding lakes abroad.

In Wales, the Wakestock Wakeboarding Festival takes place every year, and there are people in large crowds. You can also take a look at our list of some of the best wake parks in the UK by clicking here.

We hope you found our ‘guide to what is wakeboarding?’ Useful. If you need to purchase wakeboarding equipment, take a look at our online store by clicking here.